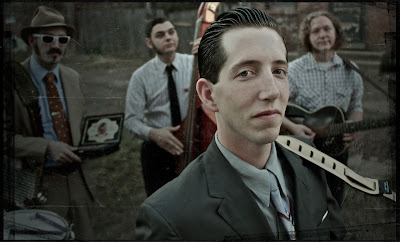 Pokey LaFarge and his band, The South City Three, may be an act that looks to the past for inspiration, but are very much a group that is building their own reputation in the hear-and-now with their incredible live performances and addictive discography. As a multi-talented musician and songwriter of only 27 years, Pokey writes and performs with room-rousing energy. Mr. LaFarge and his partners draw from early country, western swing, jazz, jug bands, and string band music. The act continues to impress loyal listeners, as well as reel in newcomers wherever they perform.

Mr. LaFarge And The South City Three are far from resting on their accomplishments, which have recently, been abundant. The act's third full-length album, 2010's Riverboat Soul, won the 10th Annual Independent Music Award for "Best Americana Album", and the group recently recorded a new 45" single that is out now available exclusively on Jack White's label, Third Man Records. Not one to sit still and idle, Mr. La Farge and his outstandingly superb band have a new record on deck and have already hit the road to support it. In their travels, the men will return to The Newport Folk Festival this July. It will be their second year in a row performing at Newport, and their act is one not to missed! 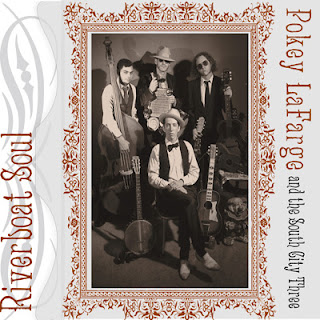 Mr. LaFarge, despite battling an intense case of bronchitis that he picked up while traveling from Pittsburgh to New York, performed an inspired and energetic set at Jalopy Theatre in Brooklyn last Thursday, April 7th. Although feeling under the weather, and with smiling apologizes, Mr. Large cheerfully did his best and powered through. He led his band through an infectious and spirited collection of tunes, which included some fantastic new numbers from his upcoming new album, Middle of Everywhere.

Despite feeling a bit worn down, and regretfully having to cancel his next two nights in NYC and NJ, Mr. LaFarge was kind enough to answer some questions including how he began playing music, his writing and recording experiences, and his biggest musical influences. Clearly a man on a mission, Mr. LaFarge And The South City Three are on the move!

When did you begin playing music?

Pokey LaFarge: I had been listening to the old blues since I was about 14, but when I heard Bill Monroe, I started playing mandolin at 17. Then I graduated high school and headed west and started hitchhiking and playing on the street.

What was your first instrument?

PL: I picked the mandolin because it was different, and no one around me was playing it or listening to old music. I was drawn to the old music for so many reasons but I have to think that as a kid I just wanted to be different. I had to learn how to appreciate it. Of course, playing with others follows when you are a mandolinist, fiddler, or playing any other instrument that is not generally a solo instrument. 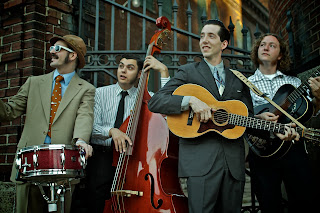 Your music seems to draw from a number of creative styles, namely: country, blues, ragtime, western swing, and early jazz. Can you talk a little bit about how you discovered these genres?

PL: I discovered the bulk of the stuff as a kid. But as I grew older I began to love more of the weird, harder-to-explain groups such as Mound City Blue Blowers, Washboard Rhythm Kings, Dixieland Jug Blowers, Harlem Hamfats, Swift Jewel Cowboys. These were groups that meshed a lot of styles together. That’s why I’ve grown to love western swing so much. It’s the most versatile genre.

What was it about this music that captivated you and compelled you to write in these styles?

PL: I guess it grabbed me when I was young because of how different it was to everything I was hearing on the radio and on TV. The soul richness of it. The honesty and the purity. But most of all, it was acoustic music that I was drawn to. As far as writing, that’s something I’ve been doing as long as I can remember. I wanted to be a writer when I was real young. Writing songs is what I do.

Can you describe your writing and recording process for Riverboat Soul?

PL: The songs on the album were half-written when I was still playing solo, and the other half when the band started to come together. It was a raw experiment of sorts. We recorded it down in Nashville. Each of us were in a different room but could see each other. Eye contact is very important. The next album we have coming out in July, called Middle of Everywhere, is more of an evolved band sound. We are starting to come into our own. 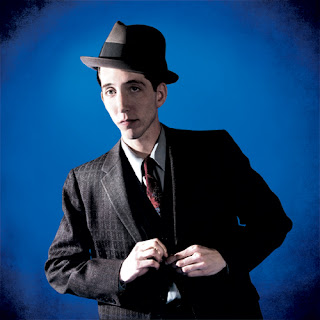 You recently recorded your new 7" single, "Chittlin' Cookin' Time In Cheatham County" b/w "Pack It Up", with Jack White for his Third Man Records label. How did you connect with Jack White ?

PL: He heard us on WSM 650AM down in Nashville. They were playing Thanksgiving theme tunes around Thanksgiving. They played a King David’s Jug Band tune we do on Riverboat Soul called "Sweet Potato Blues". His manager got a hold of mine. My guy said Jack’s manager would be calling me tomorrow. So when I saw the 615 area code I thought it was the manager. But it ended up being Jack himself. I was pretty surprised. He said he loved my voice and our sound, and that he wanted make a record. Of course I obliged and said "Name the date". We were really busy but made a day to do it. I’m very happy and honored that it happened.

Can you describe your experience working with Jack White and recording at Third Man?

PL: Jack is real music man. He’s got one hell of an ear. He’s definitely a musician's producer. He can take a regular tune and flip it on its behind and make it great. 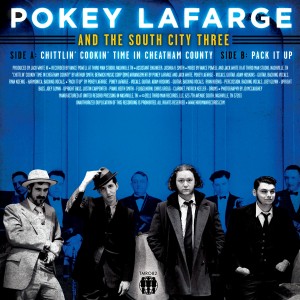 You self-released your debut, chose Big Muddy Records for your follow-up, and put out Riverboat Soul out on Free Dirt Records. Your new single is out on Third Man. What advantages does working with smaller, independent record labels provide for you creatively?

PL: Well, a chance to have help releasing your record is definitely important. But also I get to produce my own records (with the exception of Third Man) so I get to say what goes. We don’t have a huge budget to record but we make it work. There’s been great musicians that have come in and played on our records for not a lot of money. We’re thankful for that. 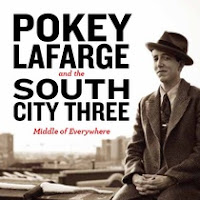 What can you tell us about your new album, Middle of Everywhere? When will it be released?  What would you say sets it apart from Riverboat Soul?

PL: Middle of Everywhere will be released May 20 in Europe by Continental Records and July 19th in the U.S.A by Free Dirt Records. This album is different in many ways. Namely because we have some great horn players on this album. We’ve been able to move towards a more swinging string band based jazz sound.

You're currently on the road and will be returning to the Newport Folk Festival for the second time this summer. What can newcomers expect of your live show?

PL: Hopefully a lot of fun. Never being too serious too- where people can’t smile, revel, and enjoy themselves at every second. Life is good when you have good people, good drink, and good music.

What's most rewarding for you when playing festivals shows?

PL: It all depends on the festival. 95% of the time we’re completely different than any other group at the festival. Just like when folks come see us play they say "Wow, that was refreshing." I guess that’s part of the appeal. I mean, so much has been done already but still the quest remains for people to find that which is different. But funnily enough, our music has been around for over one hundred years. The fact is that people don’t listen to the old music so they don’t know how to classify us. Even the folks who do listen to the old music regularly don’t know how to classify us. That’s a good thing. I like hearing bands like that too. That’s what is great about festivals- especially the ones in Europe. You hear folk music from around the world. Newport on the other hand, that’s for the most part, an American institution that is known world round. To play there was one of the biggest honors of my life. To do it two years in a row is almost unbelievable. 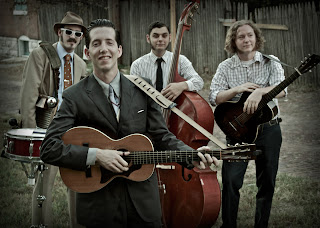 Who are your biggest musical influences?

PL: Jimmie Rodgers- because of his voice and his songwriting. He practically created his own sound. He was an innovator. Same reason I love Bill Monroe. Milton Brown is one of my favorite singers. Emmitt Miller as well. Robert Wilkins, Tampa Red and Blind Boy Fuller are my favorite bluesmen. Leon Redbone because he is so original, so creative, and for his voice.

As for modern groups, I like: Deke Dickerson, Big Sandy, Meschiya Lake & Her Little Big Horns, Tuba Skinny, The Dustbusters, and Rum Drum Ramblers.
Posted by Chris Mateer at 7:03 AM

Thanks for the interview. Hey Pokey, best of luck with your shows in Newport. wish I could be there. And please put in a good word for me next time you see Jack!