Greg Jamie of O' Death Speaks About "Outside" 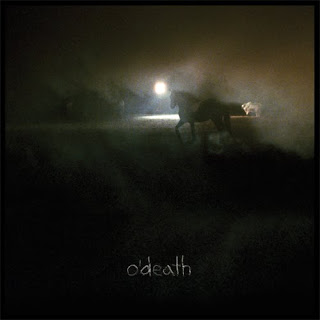 O' Death's new album, Outside, finds the band expanding on their previous efforts, with all of their theatrically-nuanced storytelling and Appalachian-inspired musical prowess firmly intact. It's an equally declarative and measured record from the New York band. Although it's still one that enthusiastically lurches forward without inhibition along with the band's other fine albums, O' Death seem to have crafted Outside with a purposeful attention to it's details.

The band may employ ukuleles, banjos, fiddles, and drums, but O' Death admirably sidesteps the mere "folk" label boundaries with their patchwork delivery and diverse instrumentation. These songs are honest, narrative, and pure, and while the band does in fact draw inspiration from deep musical traditions, O' Death is reaching deep within themselves as a collective, and in turn, creating their own interpretive sound and style.

While Outside bravely moves between rollicking parades, haunted plucks and shuffles, and electric sing-alongs, the record maintains it's authenticity throughout. Whether they are dragging us through rough terrain, raising us up on their shoulders, guiding us along a creaky floor in the dark, or singing us to sleep, it is easy to trust them and want to go along.

I recently spoke to Greg Jamie, singer and guitarist of O'Death, regarding the band's new album. Here's our Q & A:

Being a band based out of New York, and a group that draws from such a wide scope of musical influences, how has living/ working in New York influenced the band’s evolution?

New York can be an inspiring, diverse place to work as a band- partially because so many people are doing it. It can be a place to find your own niche, or disregard what's popular and still have the opportunity to find an audience by playing out. Living in New York can be more of a challenge, but there's so much to absorb in music and film and art. I think the fast pace of the city helped us find an audience back when we'd play two or three times a week.

How would you describe the band’s experiences within the music community in New York? What makes working, living, and performing here rewarding for you?

We've never really fit into any particular music communities. I think we used to try to play with other folk/-Americana bands, but we're not a traditional band, and it doesn't always make sense. We've played with a lot of different kinds of bands, and its rare-but exciting- when it makes sense. I think we've managed to define ourselves as somewhat of outsiders in the NY music community. I love folk music and playing folk festivals in particular but in these settings we often feel like sort of oddities.

The band has toured and played with quite an impressive and diverse range of artists. Can you describe some of your most memorable experiences?

I love the variety of bands we've played with- sometimes very trendy stuff, sometimes very traditional stuff, sometimes very strange stuff. Touring with Les Claypool was definitely memorable. I think we found that he and his fans were responsive to the fact that we didn't fit in to many musical conventions and took to us partially for that reason. That was probably one of the bigger tours we've been on. Murder By Death is a band that we've a particular fondness for. Some really great friends that we'll probably tour with again soon. I'd say that its always exciting and challenging to play to someone else's fans.


A lot has happened since the release and tour for Hymns, Limbs, and Skin. Can you describe how the band began work on Outside?

This album began very much in the demo process. We were off the road for a while when Gabe and I started getting together at each others places and working out some ideas, which to us seemed very different from the material we had worked on before. We were less interested in recreating any preconceptions we had of our band- as a live band, or an aggressive/punk band- and looked forward to just writing songs that were in our heads. The demo process went around to the other members and people would add their parts separately. This was the first time we'd done anything like this before. We had always written songs together in the same room.


Outside sounds much different from the band's previous work. Was there a pre-conceived direction for the new album?

I think part of the direction was definitely to not make a punk album. We were interested in doing something more lush, something that maybe couldn't be easily recreated by us for a live show. We were only going to be interested in doing the best recording we could, and worry about anything else later. Layering tracks became a big thing for us for the first time.


What was the band’s songwriting process for Outside? How was it similar or different from how you have worked on previous efforts?

Overall, this album was all about having a different songwriting process and challenging ourselves in new ways. There are very few tracks on the album that could have what could be considered "live" moments of mutually playing together. The writing, I think, is similar in that regard. I think we wanted to achieve a more internal sound, and did that often by working separately.


What were you listening to during this time?


Personally, I wasn't listening to very much during the recording process of the album. I was just starting a big move from New York to Maine and my wife had taken pretty much everything out of our apartment in New York up with her. I was living on an air mattress in a dusty cleared out apartment. This time of transition and sparseness may have had some impact on my work on this record, but I'm not sure.


For me, when I have listened to your previous efforts, I’ve really enjoyed the band’s energy, urgency, and charge on those records. Outside maintains these qualities, but also stretches into more restrained and personal terrain.

Can you discuss your inspiration of the musical arrangements and lyrical content?

Lyrically... It's always hard for me to talk about lyrics. I think thematically these songs are very much about loneliness, about breaking away from society. A lot of songs have a lot to do with nature on this record. Living in the moment, putting things behind you. And of course, wearing long black dresses.

Now that the record is out, looking back upon it along with your previous efforts, how do you see Outside in the span of the band’s discography?

I think its a pretty important transition, and it'll be really exciting to see where it goes from here. It was important to not just keep turning more and more into a rock band, and I think this album does depart somewhat from what may have seemed like what would have obviously been ahead for us (whatever that may have been). We saw this album as potential recharge, or starting over, and while I think that may be too extreme considering the end product, it was important for us to see it that way.

Performing the new material with your previous material live, how do these work together for you?

I think at first the new material stood out as being very different for us during the live performances, but the songs are starting to integrate really well, and gel with the rest of the set. I think they come from a different place, but it gives a nice diversity to the sets that we're playing live. We don't have these sets anymore too often where we're like, pummeling the audience.

What can newcomers expect from an O’ Death live performance?

I think maybe we are known for intense performances, and that hasn't really changed too much. We are starting to integrate the new material and I think its going really well. I guess that sounds pretty boring. We're bad at describing ourselves, but I love hearing other people's description of what we do.

When will US fans get to see O’ Death again?
We just finished up a 5 week US tour and are now currently in Europe doing about 3 weeks here. There aren't too many plans in the works right now for the rest of the year. We'll probably be doing some shows in September in the US. If things go well enough, we'll keep playing a lot of shows. We go where we're wanted because we're getting too old to just keep pushing it where we're not wanted.

I just moved to Maine and have gotten pretty fond of some music thats coming out of their right now- particularly Micah Blue Smaldone, Big Blood and Wesley Hartley and the Traveling Trees. Portland, Maine has a great scene of some really unusual music that doesn't really get exposed to the rest of the country. Since we've been on the road, though, I haven't been really listening to much music outside of whats on other people's ipods and other bands at clubs etc.
Posted by Chris Mateer at 6:14 PM