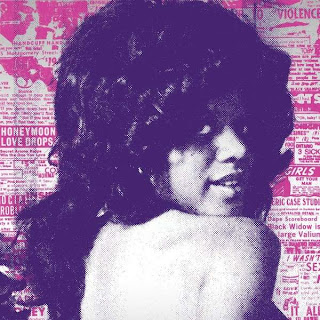 Scandalous, the new album by Black Joe Lewis & The Honeybears, is a record I just kind of heard by accident and haven't quite been able to shake since my first listen.  "Livin In The Jungle" opens the tight 39-minute set with soaring horns and funky guitar grooves, and in a burst- Mr. Lewis arrives in full force. The leader delivers smoldering declarations throughout, and together with The Honeybears, the collective oozes out of the speakers with a well-balanced  admiration of classic rock, the DIY punk aesthetics of the garage, and the staples of a well-schooled audiophile's soul collection. 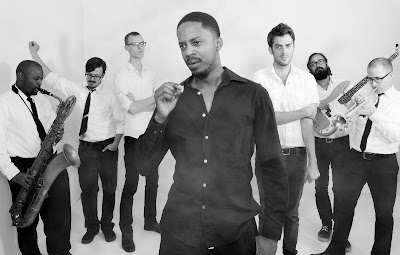 The Honeybears are an agile band that is just as at ease when they're elevating it's leader up on top of a crest of tight arrangements, or clearing the room for Lewis to prowl and prance around within their loose grooves. Scandalous gathers up a rather tight, dirty, and pleading Exile On Main Street kind-of-set, filled with danceable ass-shakers, stripped-down blues stomps, and propulsive rockers. Black Joe Lewis & The Honeybears have a watchful eye on the past in their rear-view, but make no mistake: the gas pedal is floored and they are charging full-speed ahead, racing into the darkness on to the next town.
Zach Ernst, guitarist of The Honeybears, recently was kind enough to take some time out of the band's relentlessly busy schedule to discuss the band's history, working relationship, and it's journey up to making their excellent new record Scandalous.
Who were some your biggest musical influences early on?
Zach Ernst: The band that really got me interested in playing guitar was the Meters. Before that I had only heard blues players and rock players. The Meters played in a unique style that really caught my ear. That led me to other rhythm guys like Bo Diddley, Cornell Dupree, Robert Ward, and others. 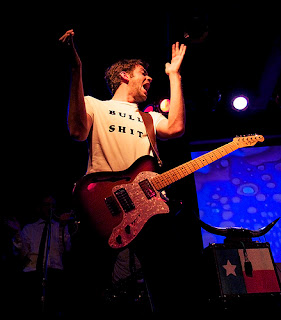 When did you know you wanted to be a musician and when did you begin playing music?
ZE: I started playing guitar when I was 11 or 12. I wasn't athletic and didn't play sports so it seemed like a good thing to do to try to meet girls.

How and when did the band form/ solidify?
ZE: I met Joe in spring 2007. I booked him and his old band to open for Little Richard at a show at the University of Texas at Austin. We started the Honeybears shortly after that.
Can you discuss how you met Britt Daniel and Jim Eno (of Spoon)?
ZE: Britt happened upon one of our shows in Austin early on, maybe our fifth or sixth gig. We were invited on tour with them shortly after that, and that's when we really got to know Jim. He invited us to check out his studio after the tour and we quickly began work on the first album with him.
The band has been really busy with recording and touring since it started. Can you talk about how the band’s relationship has grown- both personally and musically?
ZE: We all like to work, although sometimes it's hard to write songs on the road. But the band is definitely the top priority for all of us. It's been almost four and a half years since I first met Joe and I feel like we're just getting started at moving in a direction where we have our own identity. We are together in the van so much that you can't help but know everybody like they are part of your family.

How did these experiences influence the writing/ recording of Scandalous?
ZE: Scandalous is definitely more of a group effort than the first album. We came up with a lot of the songs while on tour and during soundchecks. We listen to music together a lot while traveling and all of these tracks reflect that collaborative spirit.
When you began work on Scandalous, did you have a particular direction in mind?
ZE: We were thinking about making a Stones record, something more diverse than the last one. We switched up the instrumentation a bit and wanted a set of different sounding songs.
Can you describe your songwriting writing process for Scandalous?
ZE: Some of the songs have been live staples for a few years. Joe and I come up with a lot of material together, but some tracks were brought together as a band. "Mustang Ranch" is a true story of something that happened on tour, and we wrote it on the fly in a rehearsal. Joe sent me an acoustic demo of "Messin'" and we hardly changed it at all to make the album version.
Scandalous has such a powerfully live, raw, and energetic sound to it. Can you describe the recording process?
ZE: We try to record as much of the album live as possible. Jim Eno (of Spoon) has a great ear for arrangements and we are comfortable working with him. We knocked it out pretty quickly and I feel like it's better than the first. 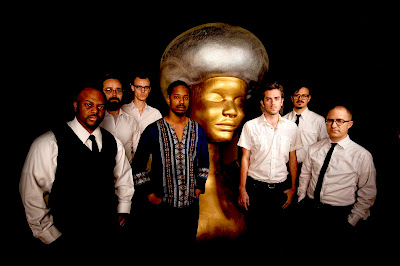 How did you connect with The Relatives, and can you describe your experiences working together on “You Been Lyin”?
ZE: I heard about them and picked up a copy of their old recordings in late 2009. A friend of ours owns a record label and turned us onto it. We started doing shows with them a while back and approached them to sing on the album. We are honored to be friends with those guys - they are the best band we've ever seen. Joe and I were recently made members of Rev. Gean's church.
You have toured and played shows with quite an impressive list of fellow musicians. Can you describe a couple of your most memorable or influential experiences on the road?
ZE: I'd say that the first drive from Montreal to Austin, or Austin to Seattle. You have no idea what it's like to sit in a van for forty hours straight until you try it. We got a mosh pit going last time we were in Columbus. A trip to the Mystery Spot in Santa Cruz remains one of our favorites. 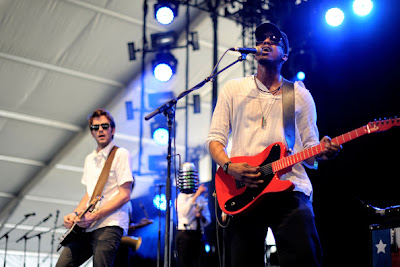 What can newcomers expect from your live show?
ZE: We'll play lots of the new album and some of our favorites from the first. Everything is faster and louder and rawer in person. Joe's really been stepping up the showmanship and we are all psyched to win over new fans on this round of touring.
Who are your biggest influences?
ZE: Joe and I found common ground in Iggy Pop, Hound Dog Taylor, The Sonics, Link Wray, Howlin' Wolf, and other rough and raw rock 'n' rollers.
Who is on your short-list to collaborate?
ZE: We are all fans of Ty Segall. Eddie Shaw sat in with us when we were in Chicago, I'd love to get him on the next album. We'll continue working with the Relatives as long as we can.
What have you been listening to lately?
ZE: Thee Oh Sees, Big K.R.I.T., Johnny Thunders, Millie Jackson.
Posted by Chris Mateer at 5:14 PM