The Uprooted Album Revue highlights new releases, reissues, and my own latest discoveries.
For this edition of the Uprooted Music Revue, I would like to share three exciting new releases by artists that are each looking to the past for inspiration, very much living and innovating their craft in the present, while continuing to move ahead artistically. 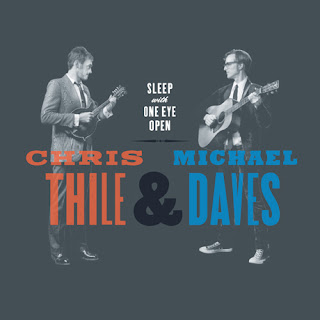 Sleep With One Eye Open was recorded over the course of a few days at Jack White's Third Man Records recording studios in Nashville. The album is a stripped-down affair filled with traditional bluegrass tunes, performed by the New York based duo of guitarist Michael Daves and the mandolinist Chris Thile.

Recorded with only a microphone between them, as they often perform together in intimately packed clubs in NYC, the duo explore the cornerstones of the classic bluegrass repertoire: instrumental breakdowns, brother-style duets, and lonesome ballads.

I don't want to fool you with the simplicity of the idea behind the record. Sleep With One Eye Open is a smartly-paced and well-varied set of tunes, performed with celebratory vigor and and passion for the material. The pair clearly display their deep respect for the songs, and each other, while injecting their own visceral energy and distinct musical personalities and sensibilities. 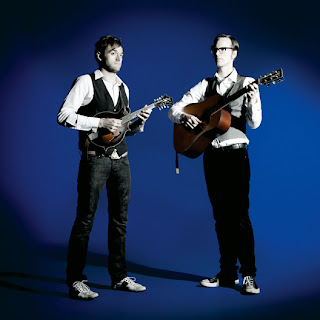 It should also be noted that later this month, Third Man Records will be releasing an exclusive 7" single of "Man In The Middle"/ "Blue Night", which was produced by Jack White himself, and makes a VERY interesting companion to the full length.

The single adds the distinctive "hands-on" production of Mr. White to Thile's mandolin and Daves' guitar, and brings the blues-rock treatment White is known best for: adding drums, bass, and electric guitars to the duo's work. It's quite an intriguing listen, which acts like the album's dirty little troublemaking brother. 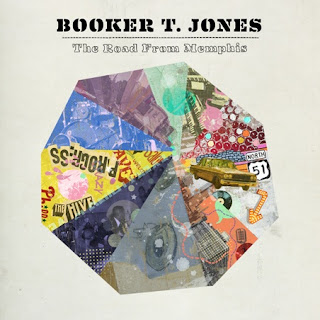 The Road From Memphis finds the legendary Booker T Jones mining classic Memphis soul, while putting his own spin on modern R & B numbers, and bringing along an roster of A-list guests for the ride. Mr. Jones eases the listener into his new record by wisely balancing his irresistible groove-seducing instrumentals, reminiscent of his classic "Green Onions", while adding the roll of Gnarls Barkley's "Crazy" and the bounce of Lauren Hill's "Everything Is Everything" for good measure.

In addition to Booker T himself lending his own vocal on "Down In Memphis", the album has Yim Yames of My Morning Jacket on "Progress", plus Matt Berininger of The National and the one and only Ms. Sharon Jones on "Representing Memphis", and finally, none other than the New York City icon, Lou Reed, on the album closer, "The Bronx".

The Road From Memphis is a superb follow-up and companion piece to his 2009 album, Potato Hole, which he recorded with The Drive By Truckers and grabbed a Grammy for "Best Pop Instrumental Album".  Considering that the album was produced by ?uestlove of The Roots and Rob Schapf (who has worked with Beck, and Elliot Smith), and includes all of these guests joining Booker T in the studio, it's no surprise that with all of this talent on board, that it is impossible to not find yourself nodding, grinning, and moving to it. It's simply irresistible, and hearing it- you just got to move! The Road From Memphis finds this master of soul music with another bulletproof collection of tunes that is lasting and more rewarding with each listen. 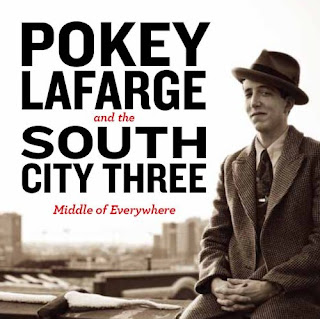 The group's outstandingly addictive new album, Middle of Everywhere, finds the instantly likable Mr. LaFarge and his partners expanding their sound with the addition of horn players, but also continuing to punctuate their numbers with the virtuosic guitar playing, bass slapping, bell-ringing, washboard scratching, and harmonica wails. The familiarity and playful nostalgia of these ingredients come together in a fresh recording that is best served hot.

There's lots to dig into on Middle of Everywhere. The grin-inducing call and response of "Head To Toe", the glide of "Shenandoah River", the toe-taping inducer "Drinkin' Whiskey Tonight", and the guitar bounce of "Good Country Girls", are just a couple of the many highlights here that go down easy. But these are really just three numbers among the thirteen here that can easily be called favorites- depending who you talk to.

Pokey LaFarge and the South City Three gracefully toe the line of their influences here, but pivot just enough to the side to have it both ways: to make their own recordings singular, while tempting the record collector and newcomer alike to dig into some older recordings of the past. The group has delighted fans during their performances in small clubs, as well as converted newly-acquired enthusiasts at their festival dates. Middle of Everywhere continues the trend, and is a tough one to put down.
Posted by Chris Mateer at 7:33 PM