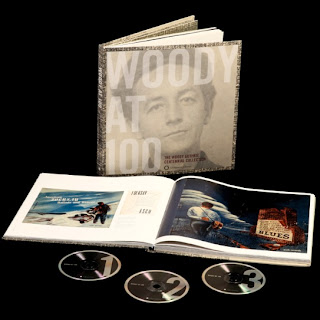 
Woody at 100: The Woody Guthrie Centennial Collection is a 150-page large-format book with 3 CDs containing 57 tracks, including Woody’s most important recordings such as the complete version of “This Land Is Your Land,” “Pretty Boy Floyd,” “I Ain’t Got No Home in This World Anymore,” and “Riding in My Car.” The set also contains 21 previously unreleased performances and six never-before-heard original songs, including Woody’s first known—and recently discovered—recordings from 1937.

Richly illustrated with photos, artifacts and Woody’s visual art and lyrics—plus extensive essays on Guthrie and his songs, Woody at 100 commemorates and displays the genius of one of the greatest songwriters, musicians and visual artists of the 20th century.

The book features essays by co-producers Robert Santelli, executive director of the GRAMMY Museum and author of This Land Is Your Land: Woody Guthrie and the Journey of an American Folk Song, and Jeff Place, Grammy-winning archivist for the Smithsonian Center for Folklife and Cultural Heritage and producer of several Woody Guthrie collections and exhibitions. 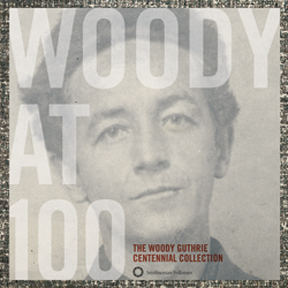 Jeff Place has been the archivist for the Ralph Rinzler Folklife Archives and Collections at the Center since coming from the Library of Congress American Folklife Center in 1988. He oversees the cataloging of the Center's collections.

He has been involved in the compilation of thirty-eight CDs for Smithsonian Folkways including Woody Guthrie's Long Ways to Travel: The Unreleased Folkways Masters, which won him the 1994 Brenda McCallum Prize from the American Folklore Society, the Asch Recordings of Woody Guthrie, many of the Smithsonian Folkways Classic Series and the Lead Belly Legacy Series. Place has been nominated for four Grammy Awards and ten Indie Awards, winning two Grammys and five Indies. He was one of the producers and writers of the acclaimed 1997 edition of the Anthology of American Folk Music and the Best of Broadside, 1962-1988 (2000).

Place has overseen the recording of a number of regional folk festivals in addition to the Smithsonian Folklife Festival. He was a member of the curatorial team for the traveling Woody Guthrie exhibition, This Land Is Your Land, and the co-curator of the 2003 Appalachia program at the Smithsonian Folklife Festival. He has been a collector of traditional music for over thirty-five years. 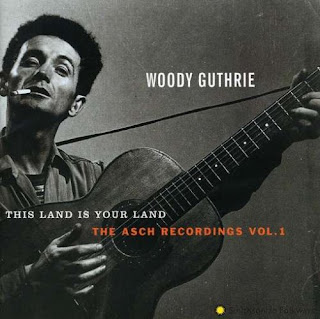 Hi Jeff. Thanks so much for taking the time to answer a few questions regarding the release of the new Woody Guthrie Centennial Collection. Before we dig into the new collection and your own history working with Woody Guthrie's music, I'd like to begin by asking you to share some of your own history with readers.

First, can you tell us about your previous work before joining Smithsonian Folkways?

Jeff Place: I ran a record store in Washington DC late 1970s (Discount Records and Books) and was a buyer for another chain of stores in DC in the early 1980s. I also worked at the Library Congress Archive of Folk Culture in the mid-80s.

How and when did you join Smithsonian Folkways?

Jeff: I was hired at the end of 1987. That’s when Folkways came to the Smithsonian. Tony Seeger was hired as curator and myself as archivist. We were still Folkways then. Smithsonian Folkways was created Summer 1988.

When did you first hear the music of Woody Guthrie?

Jeff: I grew up with it. My parents were folk fans in the 1960s and we used to sing “Riding in the Car” in the car. I also used to have a college radio show in the 1970s that played folk music, including Woody.

How and when did your own affinity for his music and life story deepen?

Jeff: It is more about having worked with his original recordings and his material for 25 years. I digitized all of his session recordings for Moses Asch in the 1990s. He obviously was a key artist in our collection. I also ended up producing a number of Guthrie reissues including The Asch Recordings. 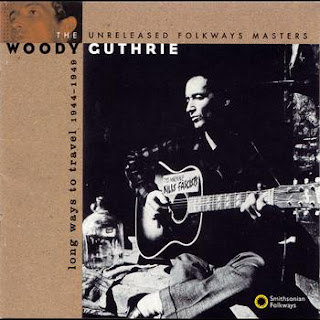 Can you discuss your work on some of your previous Guthrie works?

Jeff: Moses Asch only released part of all the Guthrie recordings he made. Woody recorded hundreds. I had access to all of them. Long Ways to Travel was the unreleased material of interest I found during the digitization process.

The Asch Recordings was an attempt to put out all of the Woody stuff that had not been out on CD (but previously released on LP or 78), also more good stuff from the unreleased material. It was a chance to work with Guy Logsdon, who knows more about Woody than anyone I know.

Please discuss your work on the curatorial team for the traveling Woody Guthrie exhibition, This Land Is Your Land.

Jeff: We worked with Nora Guthrie, who selected the images and items for the exhibit. One interesting part was I got to interview a bunch of musicians on camera for The Legacy of Woody Guthrie film that was shown at the exhibit including Billy Bragg (in London), Ani DiFranco, Corey Harris, Jeff Tweedy, and Jay Bennett. 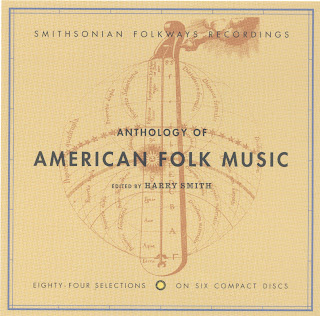 You have also contributed to the 1997 edition of the Anthology of American Folk Music, the Best of Broadside, 1962-1988 (2000), Leadbelly Legacy Series, and Smithsonian Folkways Classic Series. How do these experiences, along with your work with Woody Guthrie’s life’s work, culminate for you? What is it about these works that inspire you most?

Jeff: Each one is a separate project that interested me. The Anthology is different it was an iconic release on Folkways we needed to reissue. It took years to get all the permissions. Since I knew a lot about all the artists I was asked to write a lot of the liner notes. It was fun tracking down information on the others. This was 1997, the internet wasn’t like it is now. I had to do a lot of calling up local music experts to find out folks in their area on the set. I also helped Pete Reiniger with the sound.

This is a very large collection and there are hundreds of projects worth doing, so I have tried to select the ones I think need to be done. Broadside was entirely my creation and planning. The Lead Belly reissues were a parallel project to the Guthrie ones.

The Classic Series allows me to pick a topic and create the great “mix tape” of key songs from the whole archives. I think of them as doors into our collections. Would be I didn’t have to sleep I could make a lot more of these projects. 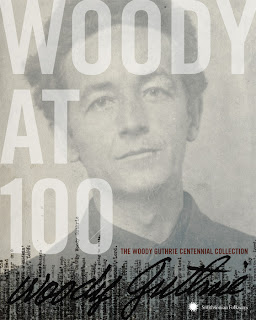 How did the Woody at 100 project get started?

Jeff: My friend, Bob Santelli, CEO of the Grammy Museum, called me in October 2010 and suggested that we put together a Guthrie box set to go along with all of the Woody Guthrie events going on 2012. I have always wanted to do a coffee table book of Woody’s artwork that we have in our collection. Tony Seeger and I talked about 20 years ago. This seemed to be a perfect combination to do that with the music.

I was looking for the most important of Woody’s compositions, also ones illustrating different styles like “Talking Blues”. Peter La Chapelle who had done research here years back had discovered the earliest known recordings of Guthrie in L.A. He thought they were from his KFVD days in 1937, he now thinks they were from 1939. We got them copied.

I wanted this set to cover all of Woody’s short career (The Asch Recordings were mainly 1944-1947), including Library of Congress, 40s radio, kids songs etc. We picked a few of my favorites like “What Are We Waiting On”.

What do you think his earliest recordings, that until now have been unreleased, add to the set?

Jeff: It’s a younger Woody. Some of the lyrics of "Do-Re-Mi" and "Can’t Feel at Home in This World Anymore" are slightly different, and are more directed at his life in L.A. They changed by the time he did the Dust Bowl Ballads records the next year. 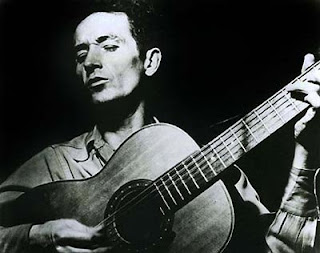 What are your favorite recording that you would suggest to new fans who have heard some of Guthrie’s work and would like to dig deeper?

Jeff: "Lindbergh" and "What Are We Waiting On" are my favorites. I also love "Pastures of Plenty".

Woody really only has a handful of legitimate recordings. The Library of Congress, RCA, Moses Asch recordings (released by Folkways and Stinson), and the Bonneville Dam recordings. That’s most all of it. There are a ton of cheap knock-off Woody Guthrie compilations out there, usually put out by non-U.S. companies using the difference in copyright limits to just do it. A lot of these have mediocre liner notes.

I suggest to really learn about Woody, fans should go to the real issues of his music. There's also lots of good books on Woody too.

Could you discuss a few of your favorite Guthrie recordings that you feel are particularly relevant today?

Jeff: A lot of them are. Especially with economy. “Jolly Banker” and “Do-Re-Mi” all still definitely work. Woody felt his songs were for a purpose, not entertainment. If he was around today he would still be changing the lyrics of them to make them fit now.

If there is one often overlooked Guthrie tune, what would you say it is? What is it about it that deserves the attention of listeners?

Jeff: "Deportees". It was just lyrics, a fellow named Martin Hoffman put music to it. It's all about migrant workers. The whole immigration issue in the US is still a big issue.

What would you say it is about Woody’s life and music that endures and continues to inspire?

Jeff: He was a model of someone who put his feelings about societal wrongs right out there. He was the first great of the singer-songwriters, even though now most musicians write their own music, it came from Woody.
Posted by Chris Mateer at 8:33 AM