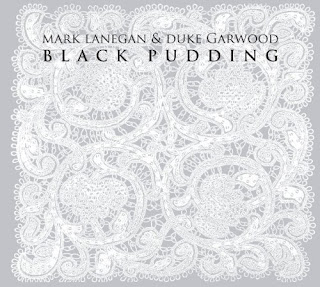 This week, enigmatic songwriter, vocalist, and frequent collaborator Mark Lanegan follows up his recent densely layered solo album, Blues Funeral, with a new project with British songwriter and guitarist Duke Garwood. The two met in 2009 at a Soulsavers show (who Lanegan has made two albums with) and the idea was born for the two to make a record together. The result, Black Pudding (Ipecac), is a mostly acoustic affair between Duke Garwood’s incredible guitar work with Mark Lanegan’s mysterious and smoky vocals.


Longtime followers of Mr. Lanegan’s solo work (as well as his recordings with Screaming Trees, Queens of the Stone Age, Gutter Twins, and Soulsavers) will surely be digging this stripped-down and intimate album. If you like what you hear, use this record as an entry point to explore Garwood’s own discography- which is well digging into.

I recently had the opportunity to ask Mark and Duke about their new album:

How and when did you meet?


Mark Lanegan: We met when I was with Soulsavers and did a show with Tenebrous Liar, who Duke was playing with at the time.

Duke Garwood: As mutual fans we got along grandly. Then a few years later, my manager got me on an acoustic tour with The Gutter Twins. The rest is history.

Mark, what was it about Duke's work that resonated with you most?

Mark: I've been a fan of Duke's music since before we met. I love his songs, the way he plays guitar and sings, and his general approach to music. The mood it evokes and the mystery in it.

Duke, can you talk about your affinity for Mark's work?

Duke: I think Mark is like John Coltrane: pure soul and sound. We share the connection with something ancient, that is music as magic and power. The soul that heals the human.

Duke, as a newcomer to your work myself, can you briefly take us through your discography?

Duke: I've released 4 albums in the past decade. Holy Week, Emerald Palace, The Sand That Falls, and Dreamboatsafari. The story of these records is epic and tragic, and thus so is all show business. I have also released some EPs, a 10" with HTRK, and a 12" with Wooden Wand. I would say it is probably best for readers just to listen and see what they pick up on.

Mark, after finishing Blues Funeral, were you sure what kind of project you wanted to do next?

Mark: To me it is all music and I'm always trying to do the next indicated thing. I try to let the music tell me what that is. 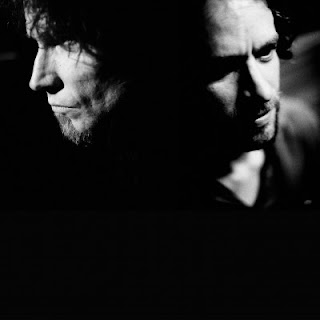 When and how did you decide to make an album together?

Mark: We were touring together and one day I asked Duke if he'd like to make a record. I had no idea what the finished thing would be like, I just thought it would be cool to do, and fun.

Duke: That was in January of 2009. We made the plan to make a record. I think it was in Rome. The objective was to make the best music possible. It always is.

Mark: My favorites are the two instrumental tracks that start and finish the record.

Duke: The first tune to set it off for me was "Last Rung". The mood and tempo of that piece set it rolling. The songs arrive fast and formed. If you don't catch them they are gone. You are then left with a ghost that can still be a song but an empty one.

Can you discuss your songwriting process and working relationship together?

Mark: Duke sent me music over a period of time and I wrote words and made up singing parts. For a few days before beginning the record we wrote together in the same room.

Duke: It was certainly a transatlantic working relationship. I created in London and Mark in Los Angeles.

How would you say that you compliment each other most?

Duke: We are both dark of mind and heavy of soul. Being a British musicianeer I am naturally loose and somewhat undisciplined. Mark showed me the path to stone cold professionalism.

I had not worked with a singer before in this way so the experience was completely new and my job was to create the music from the silence of the studio. It was very exiting and intense. A collaboration should bring out qualities the artist was previously unaware of. 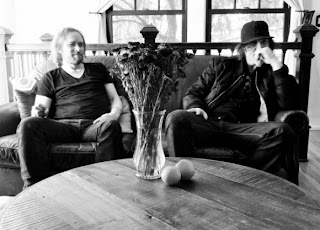 How about the recording process?

Duke: Pink Duck is the most beautiful studio I have ever heard of or seen. I like to lay down sounds like paint until the picture emerges, the sonics are born in the sound meld.

How would you sum up the overall experience of making Black Pudding?

Mark: I enjoyed it very much.

Duke: California, clear mind, sun, and heat. I learned to keep rock solid time, play it clean and make a landscape for a singer to walk around it and tip correctly.

How did you connect with/ decide to go with Heavenly and Ipecac Records for the release?

Mark: Years of friendship and respect.

Duke: Time will tell. I have finished a new solo album.
Posted by Chris Mateer at 11:13 AM